There are five different stages of team development that are as relevant to leading projects as they are to more traditional, business-as-usual settings.

Psychologist Bruce Tuckman first came up with the memorable phrase ‘forming, storming, norming, and performing’ back in 1965.

He used it to describe the path to high performance that most teams follow, later adding a fifth stage that he called ‘adjourning’ (and others often call ‘mourning’, maybe because it rhymes better).

Teams initially go through a ‘forming’ stage in which members are positive and polite.

Some members are anxious, as they haven’t yet worked out their place – others are simply excited about the task ahead.

As leader, you play a dominant role at this stage: other members’ roles and responsibilities are less clear, so assist in clarifying them. 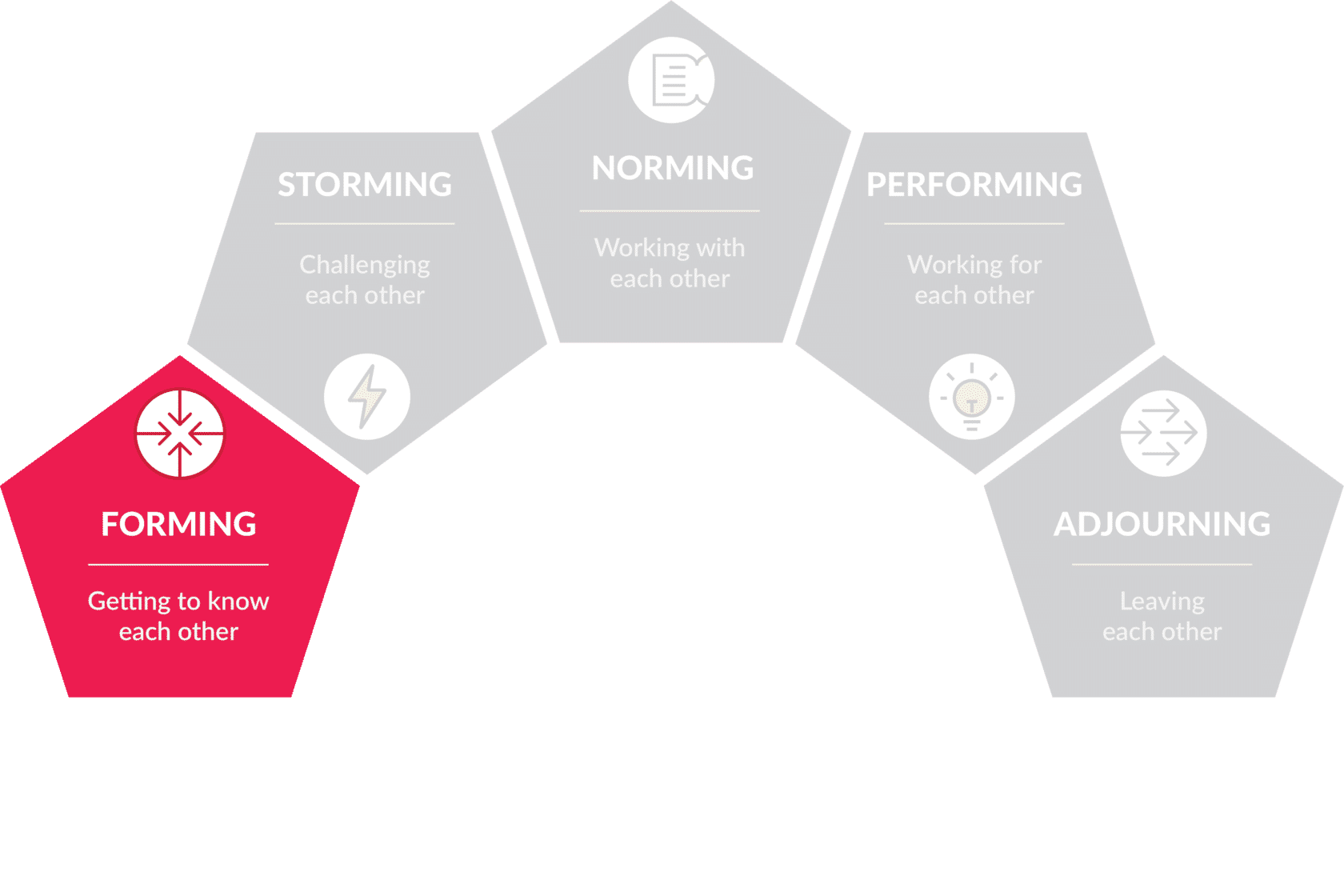 The forming stage is also usually fairly short, and may only last for the single meeting at which people are introduced to one-another; however, it may take a little longer to settle when establishing virtual teams.

Once reality sets in, your team moves into a ‘storming’ phase.

Your authority may be challenged as others jockey for position and their roles are clarified.

The ways of working start to be defined and, as leader, you must be aware that some members may feel overwhelmed by how much there is to do, or they may be uncomfortable with the approach being used.

Some may react by questioning how worthwhile the project is, and some may resist taking on tasks.

This is the stage when many teams fail, and even those that stick with the project may feel that they are on an emotional roller coaster, as they try to focus on the job in hand without the support of established processes or relationships with their colleagues.

At this point you should confirm and reinforce process and structure, defining communication methods and channels.

Work to build good relationships among team members, especially providing support to those team members who are less secure. This is also a good time to arrange a social or a team-building event.

Remain positive and firm in the face of challenges to your leadership or the team’s goal.

You might also like to explain the ‘forming, storming, norming, and performing’ idea so that people understand why conflict is occurring, and appreciate that things will get better in the future.

Conflict management is something we will explore in more detail later in this Unit. 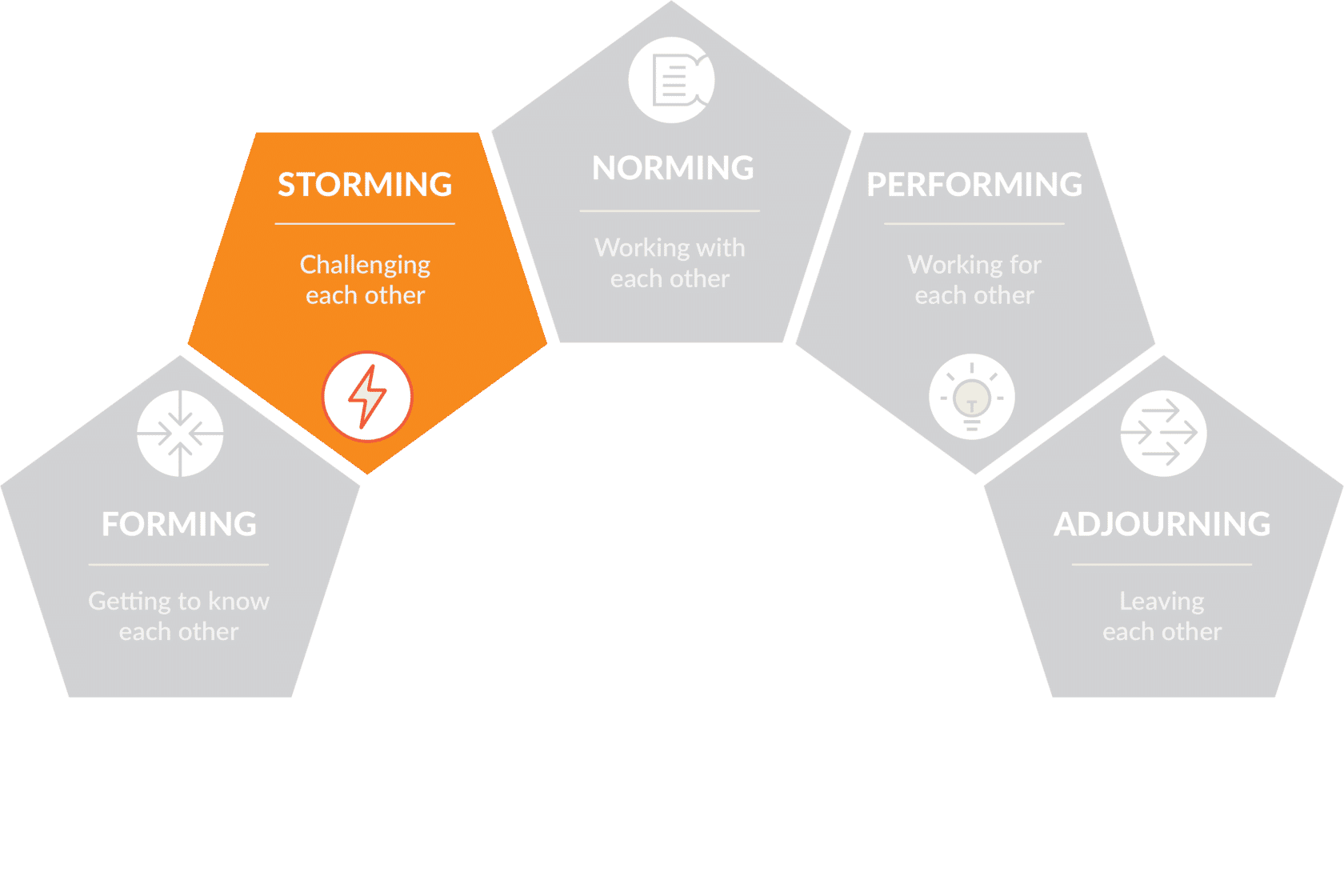 The team gradually moves into a ‘norming’ stage as work flows and relationships are established.

Team members come to respect your authority as a leader, and others show leadership in specific areas.

They also develop a stronger commitment to the goals of the project, and you start to see good progress towards them.

Now that team members know each other better, they are able to ask each other for help and provide constructive criticism.

As a leader, you can step back and help the team take responsibility for progress towards the goal.

There is often a prolonged overlap between storming and norming behaviour; and as new project processes or phases are entered, the team may lapse back into typical storming stage behaviour.

Having led them out of storming once though, you should be able to master the transition to norming again in less time. 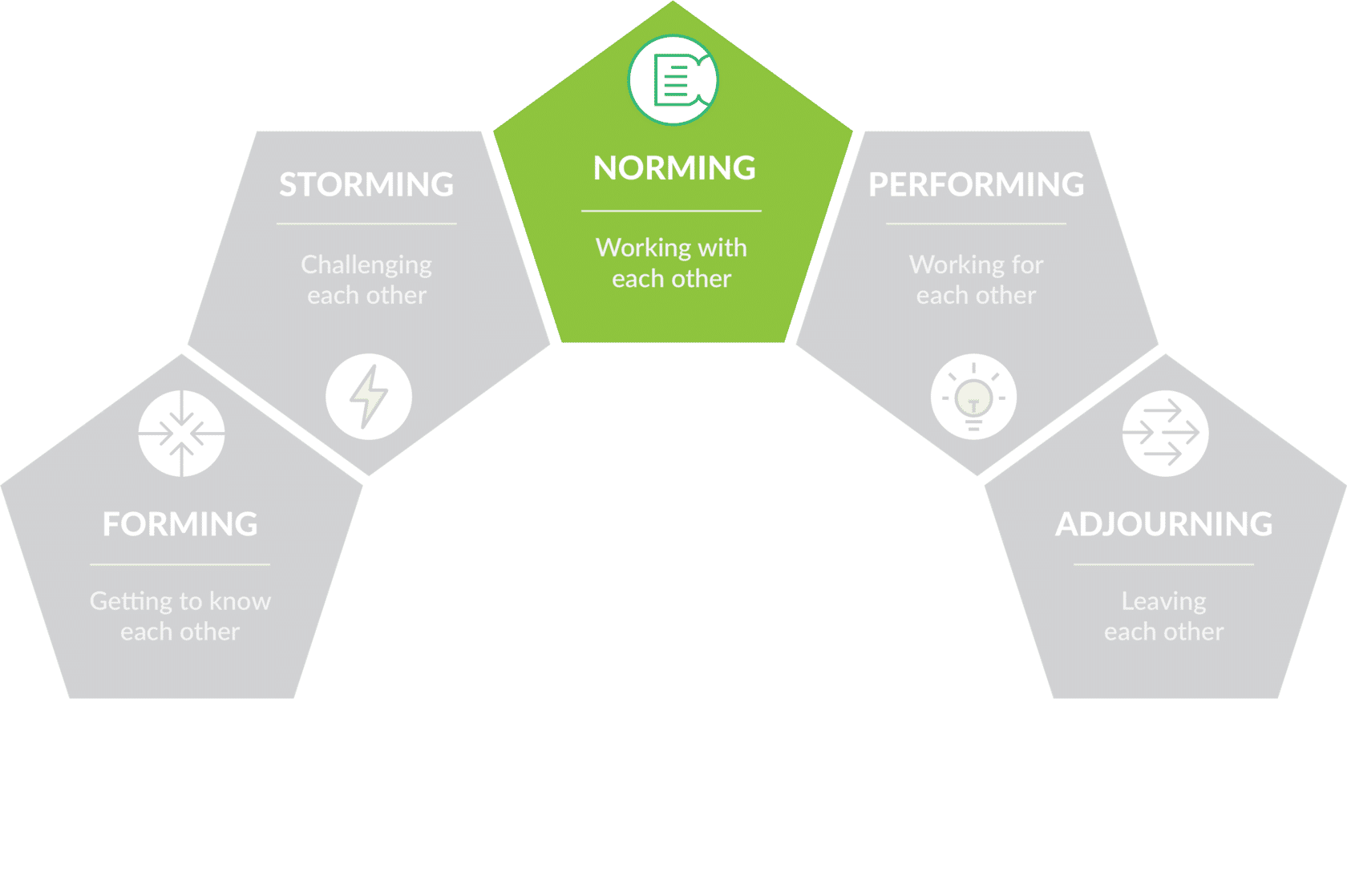 When the team reaches the ‘performing’ stage – and not every team does – hard work leads directly to progress towards the shared vision of the project, supported by the structures and processes that have been set up.

Individual team members may join or leave the team without affecting the performing culture.

As leader, you are able to delegate much of the work and can concentrate on developing team members.

Once the team has achieved high performance, you should aim to have as light a touch as possible. You will now be able to start focusing on stretch goals and other areas of work.

Nonetheless it must be noted that performing is the exception rather than the rule, especially in projects.

Within the triple constraints and the tensions that otherwise exist, more often than not norming is the acceptable standard. 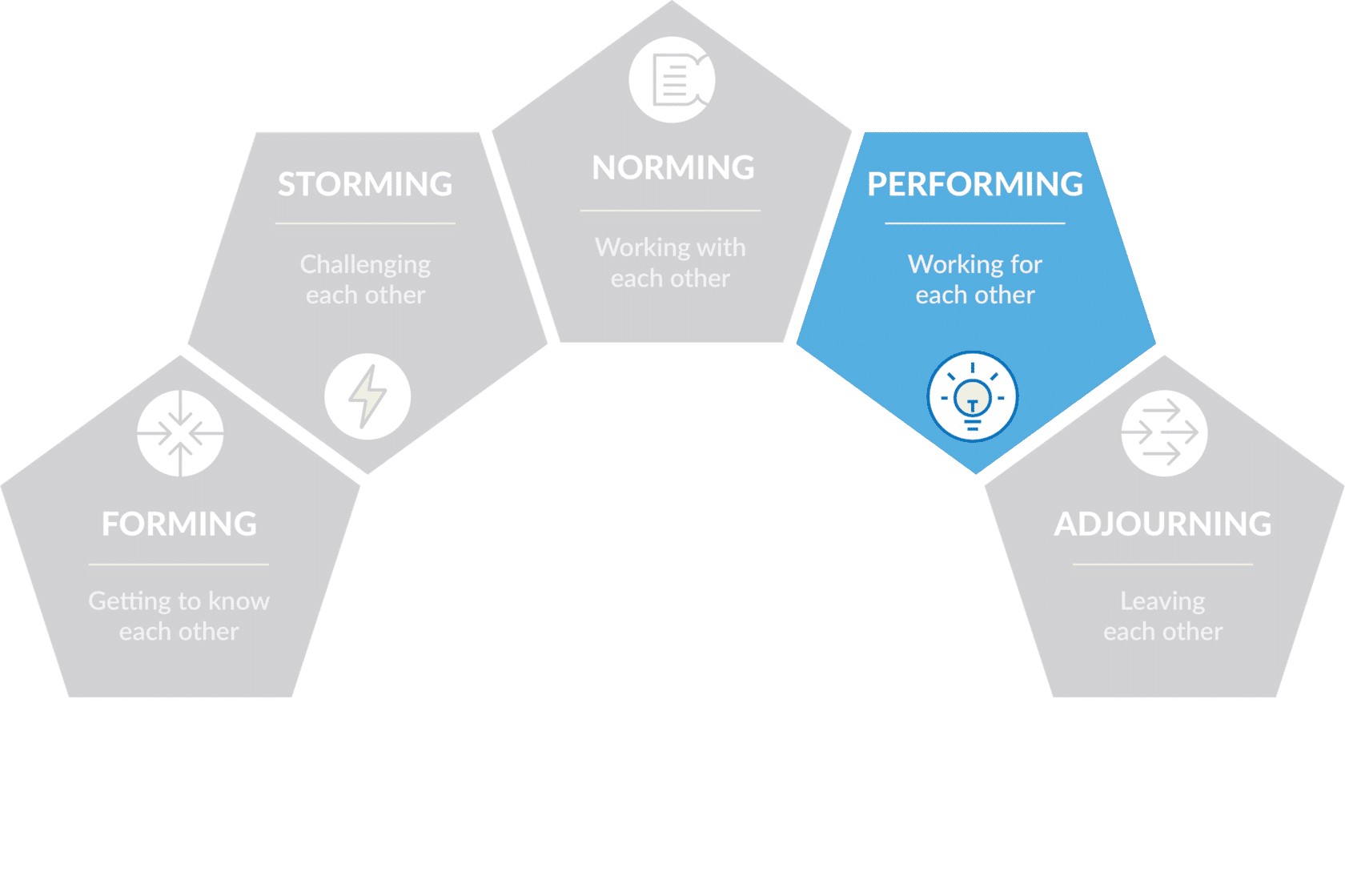 Project teams are finite by definition, and even permanent project offices may be disbanded through organisational restructuring.

The break-up of the team can be hard for members who have developed close working relationships with other team members, particularly if their future roles or even jobs look uncertain.

The ‘adjourning’ or ‘mourning’ stage is important in reaching project, team and personal conclusions.

When breaking up a team – even if the project was unsuccessful – take the time to celebrate its achievements.

From the team perspective, this is less about lessons learned and more about promoting a positive workplace culture for future project delivery. 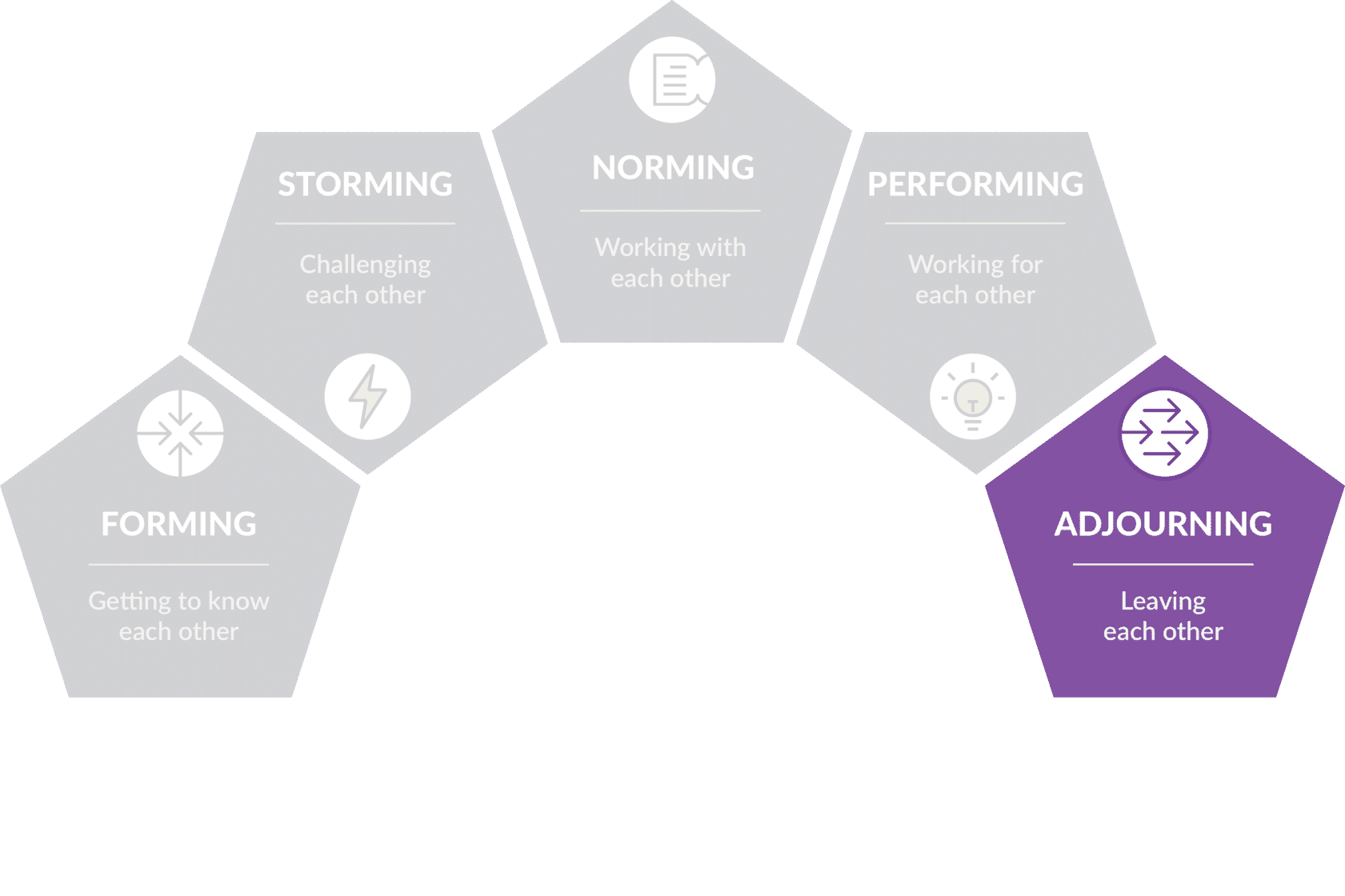 Teams are formed because they can achieve far more than their individual members can on their own, and while being part of a high-performing team can be fun, it can take patience and professionalism to get to that stage.

Effective team leaders can accelerate that process and reduce the difficulties that team members experience by understanding what is needed to move through the various stages of team development.

What this model suggests is that the strategy you employ should be a dynamic response to the circumstances of the project and the evolving state of the team.

Once again, there is no single, cookie-cutter solution to the dilemma of team development; rather, as with leadership style, your response depends on your being open to and aware of changes in the project environment. 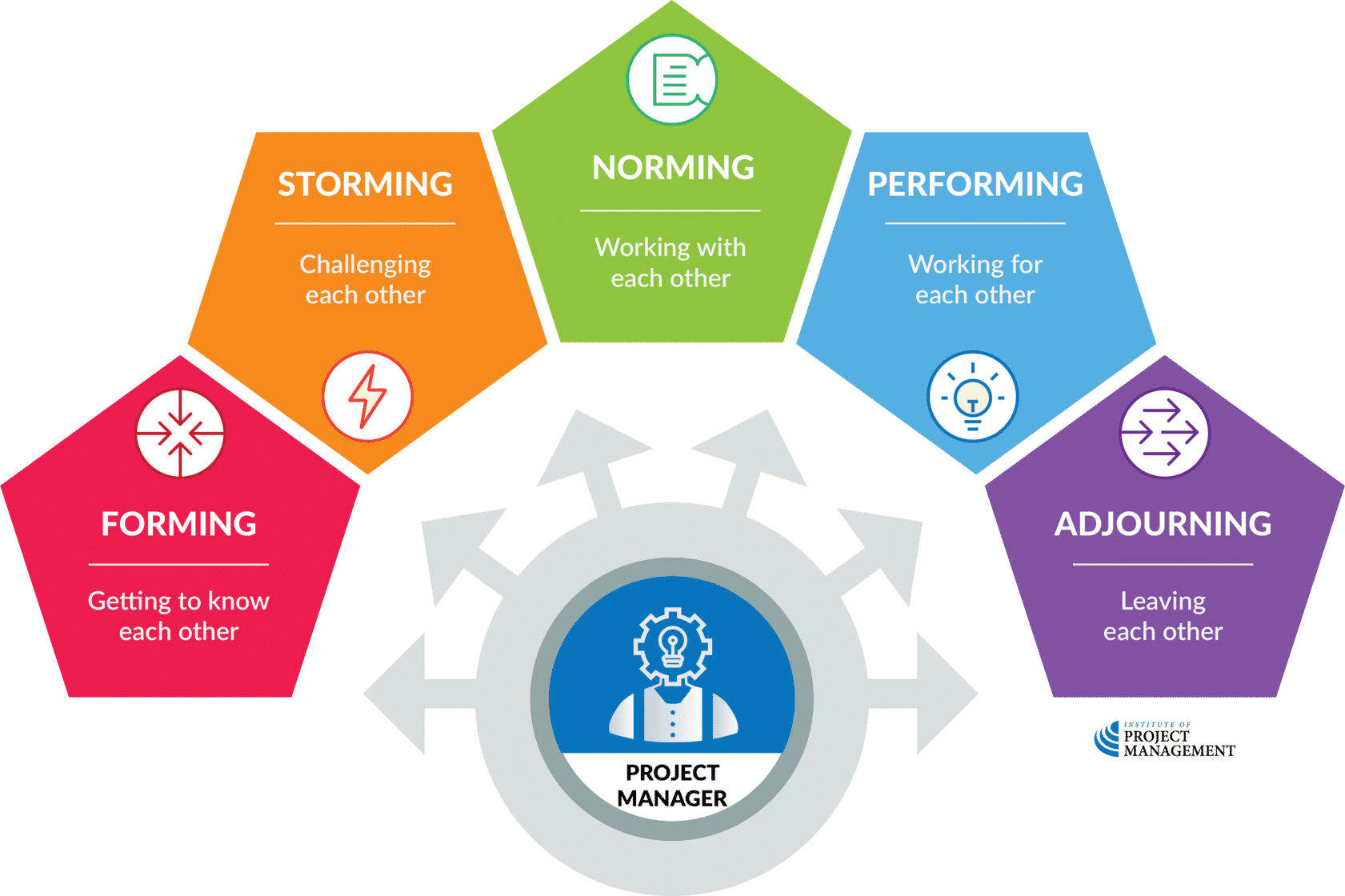