Is all conflict harmful?

Conflict is inevitable in projects.

Team ground rules, group norms, and solid project management practices like communication planning and role definition can all reduce the amount of disruptive conflict, but can conflict be used for constructive ends?

When managed properly, differences of opinion can lead to increased creativity and better decision-making.

Conflict is in fact necessary for innovation, for without the free exchange and debate of new ideas, processes and practices become rigid and can hold performance back.

We have discussed elsewhere how to leverage and even encourage conflict in formal situations, such as team meetings and facilitated workshops, to arrive at new ideas.

As a project manager, though, you may find people in conflict with you, or you may be required to mediate a conflict between project team members and/or stakeholders.

Either way, there are some basic steps you should follow to successfully resolve the situation. 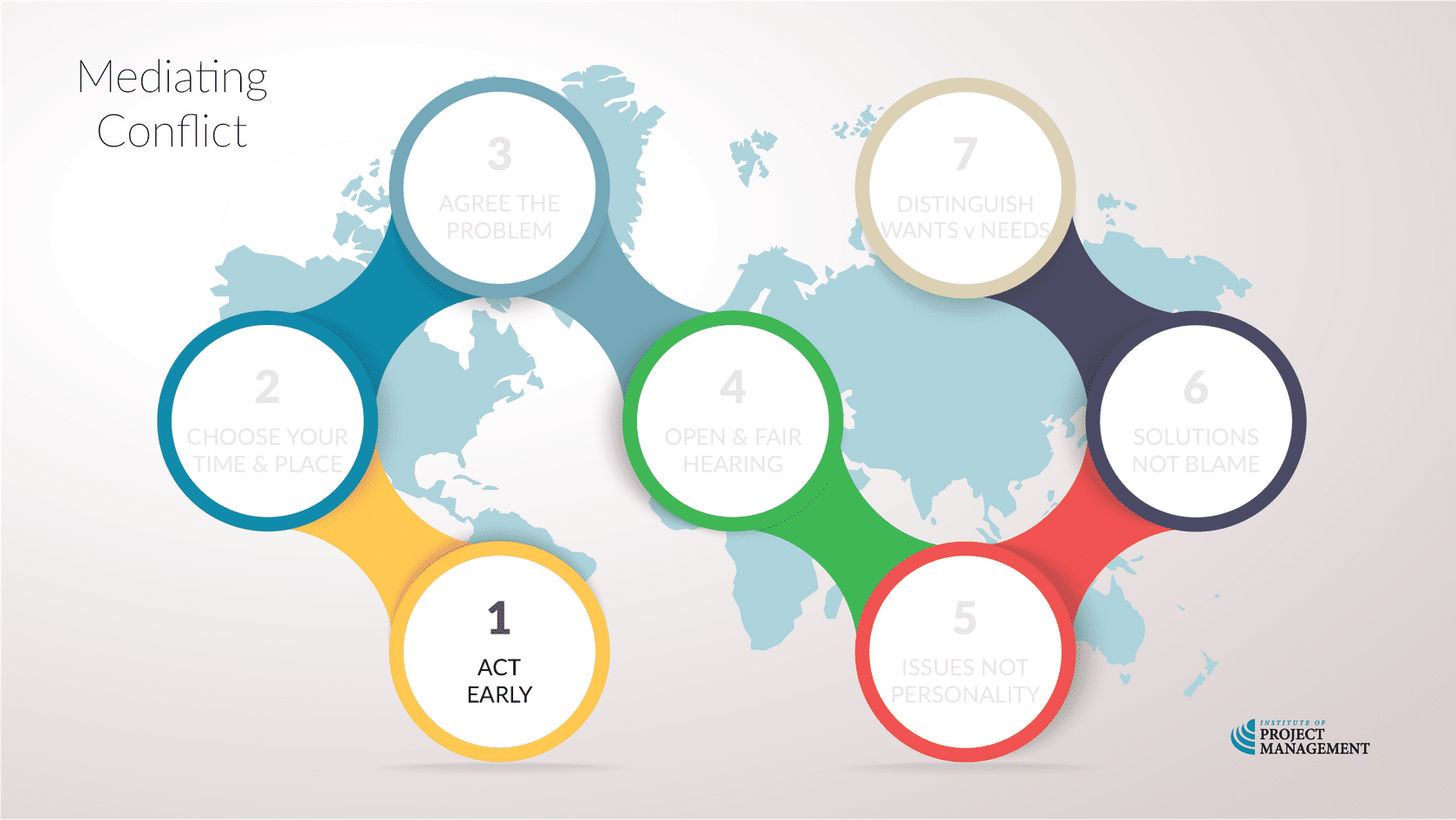 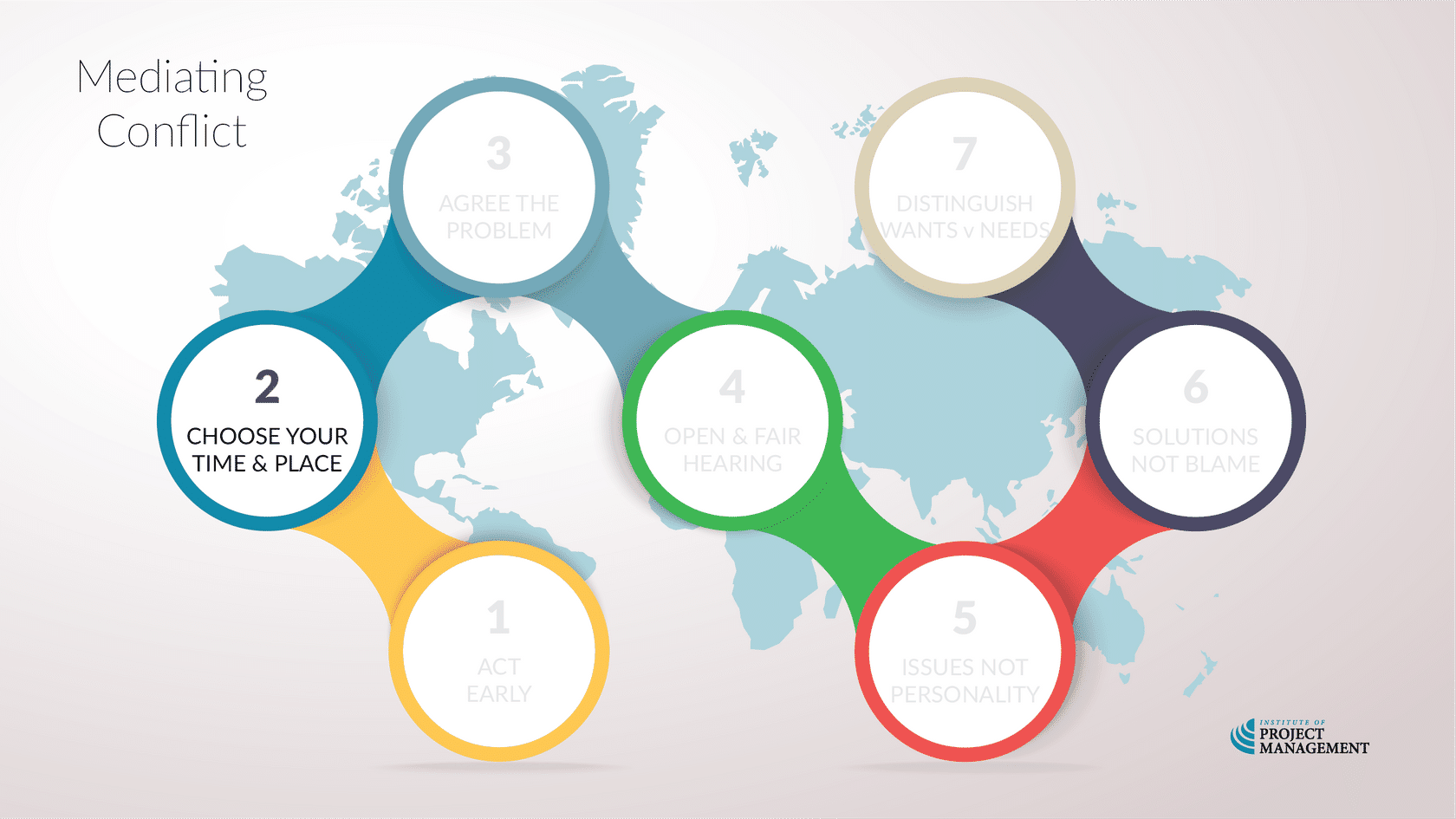 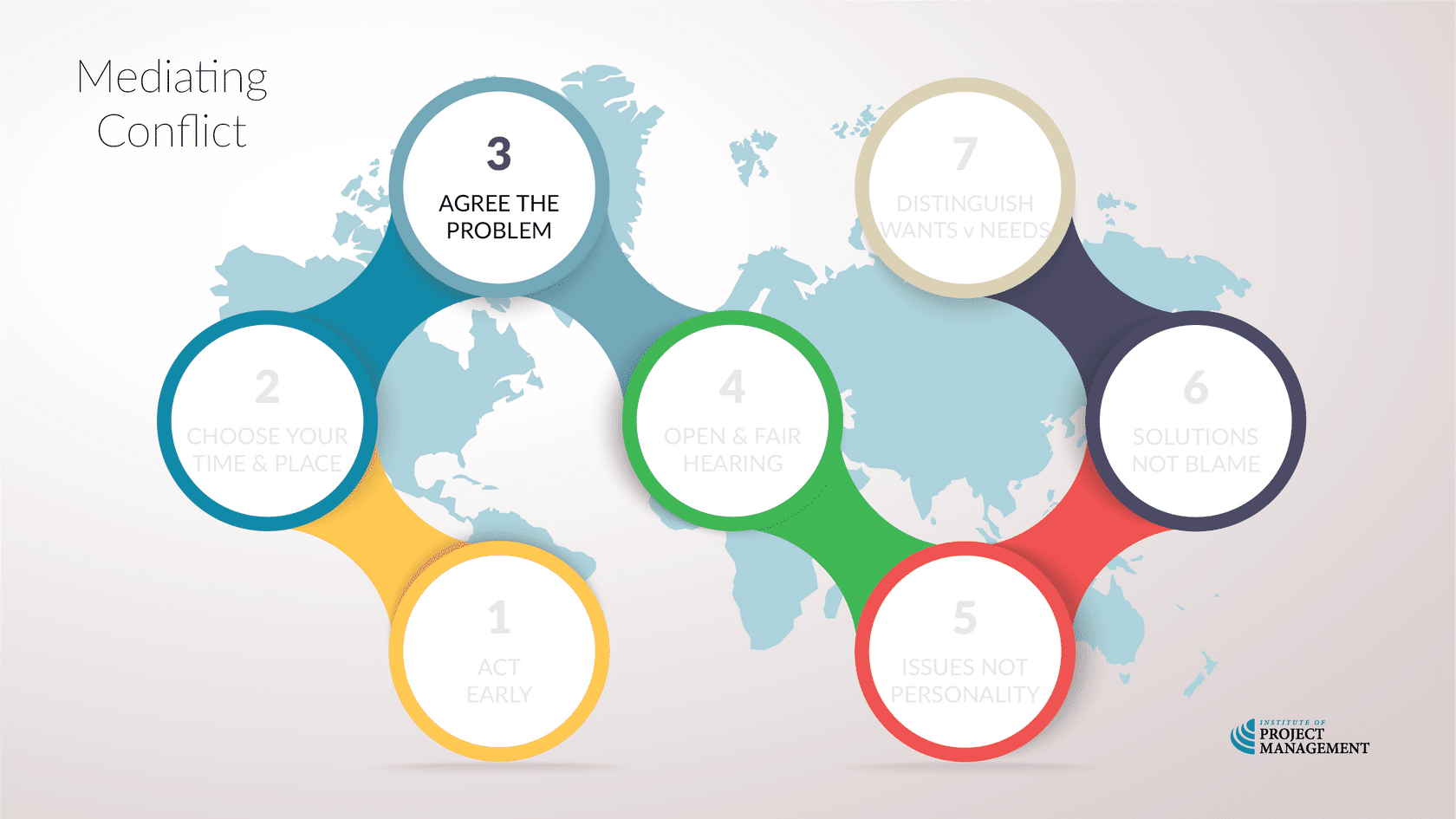 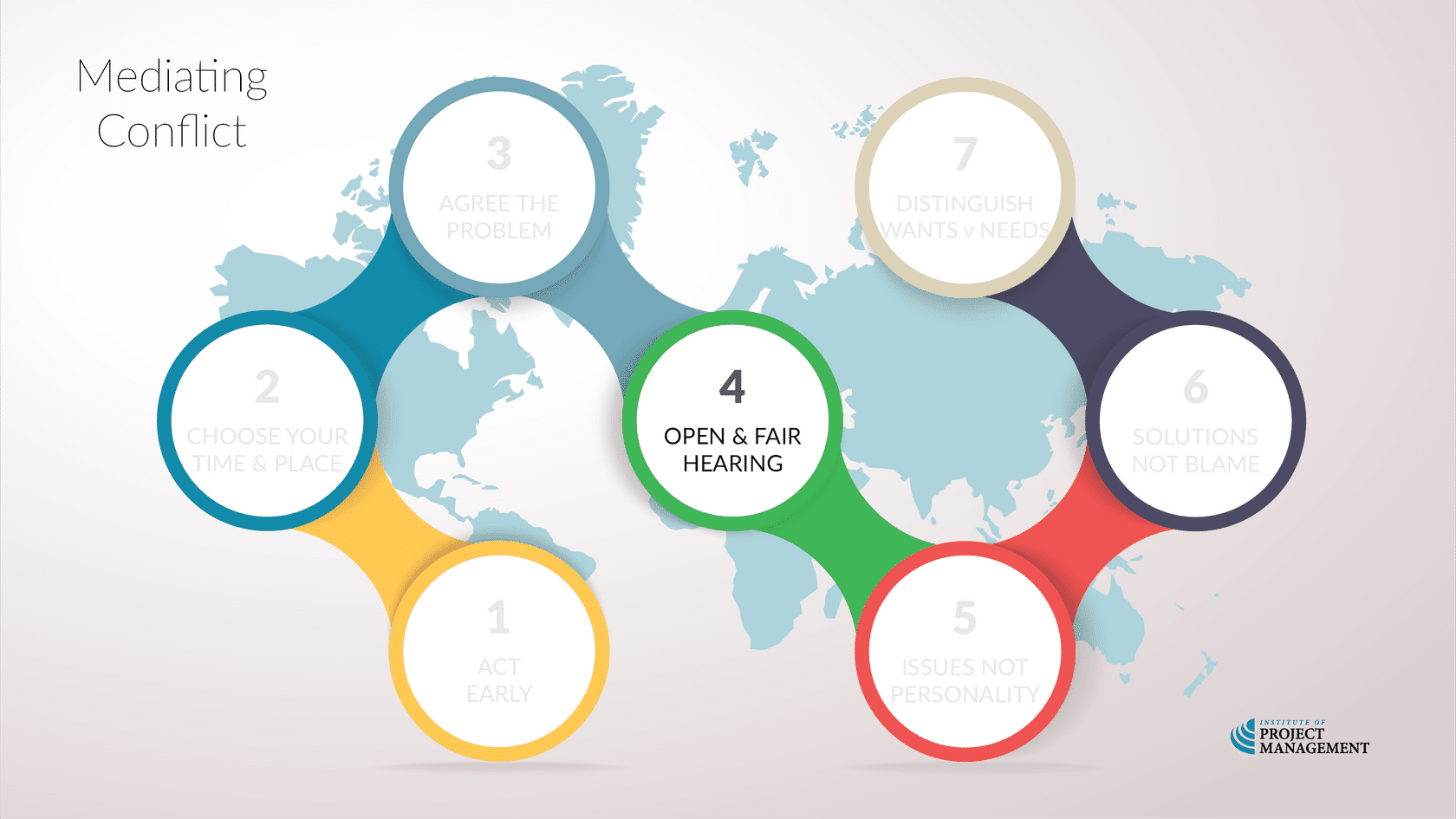 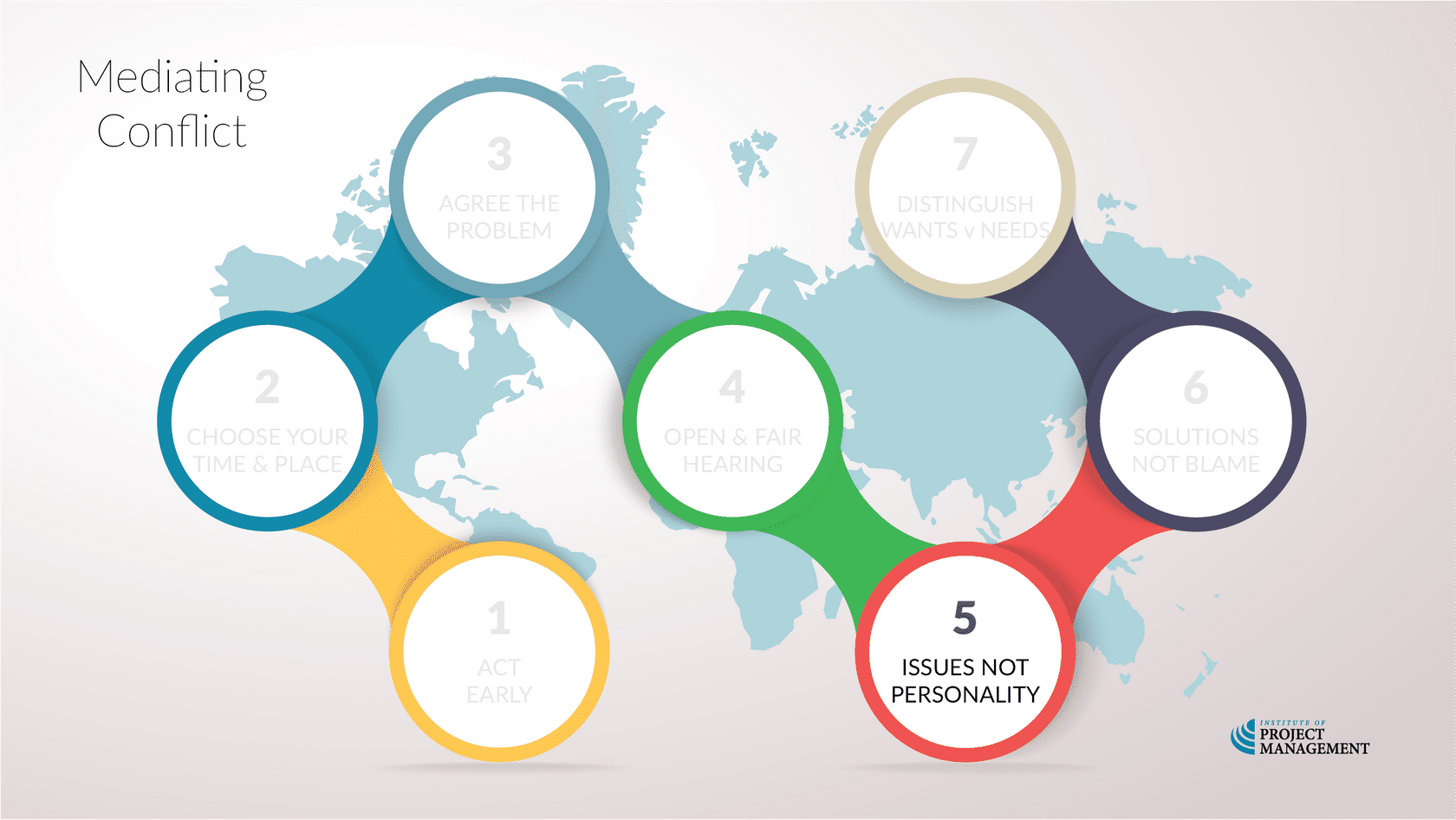 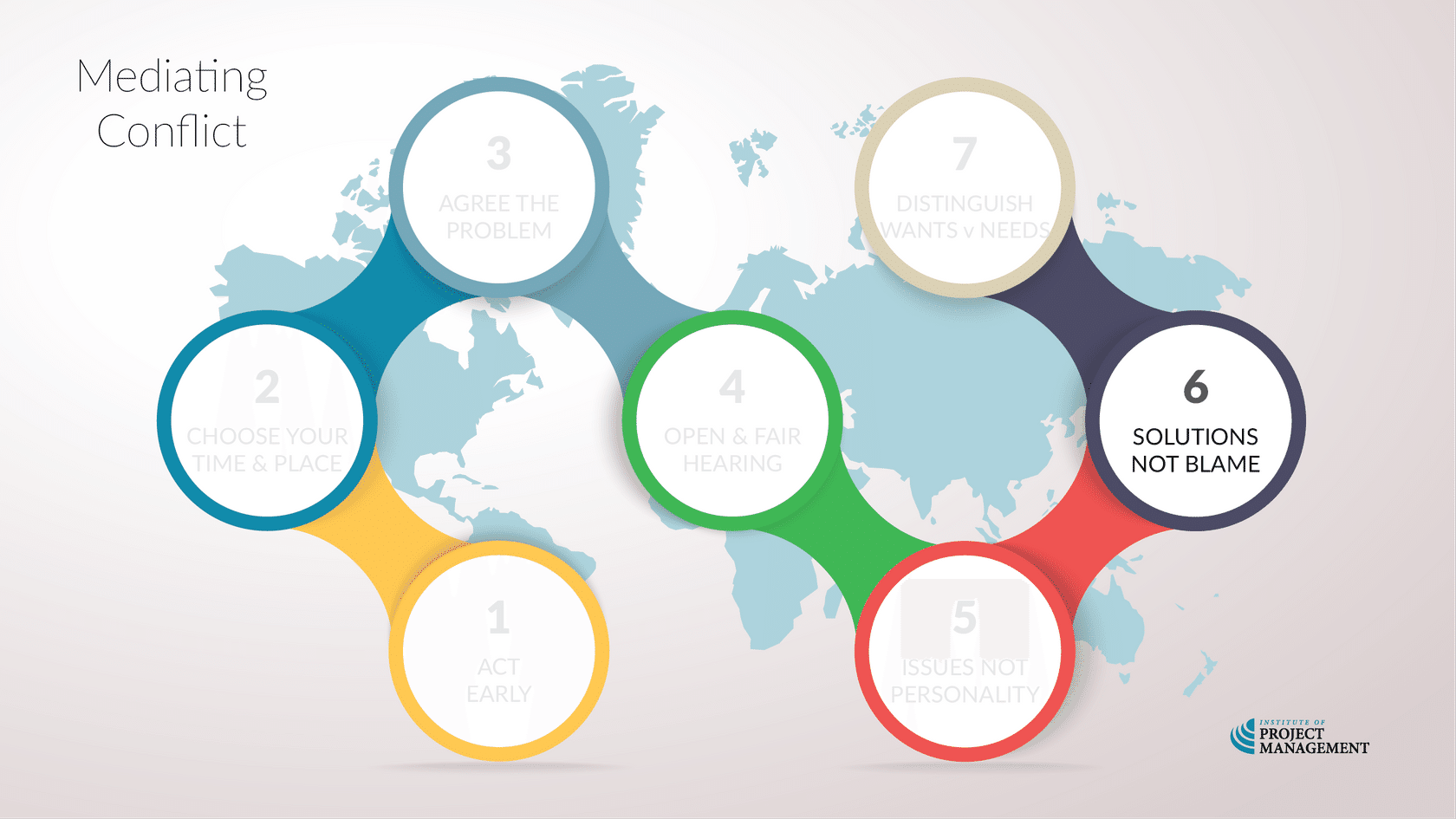 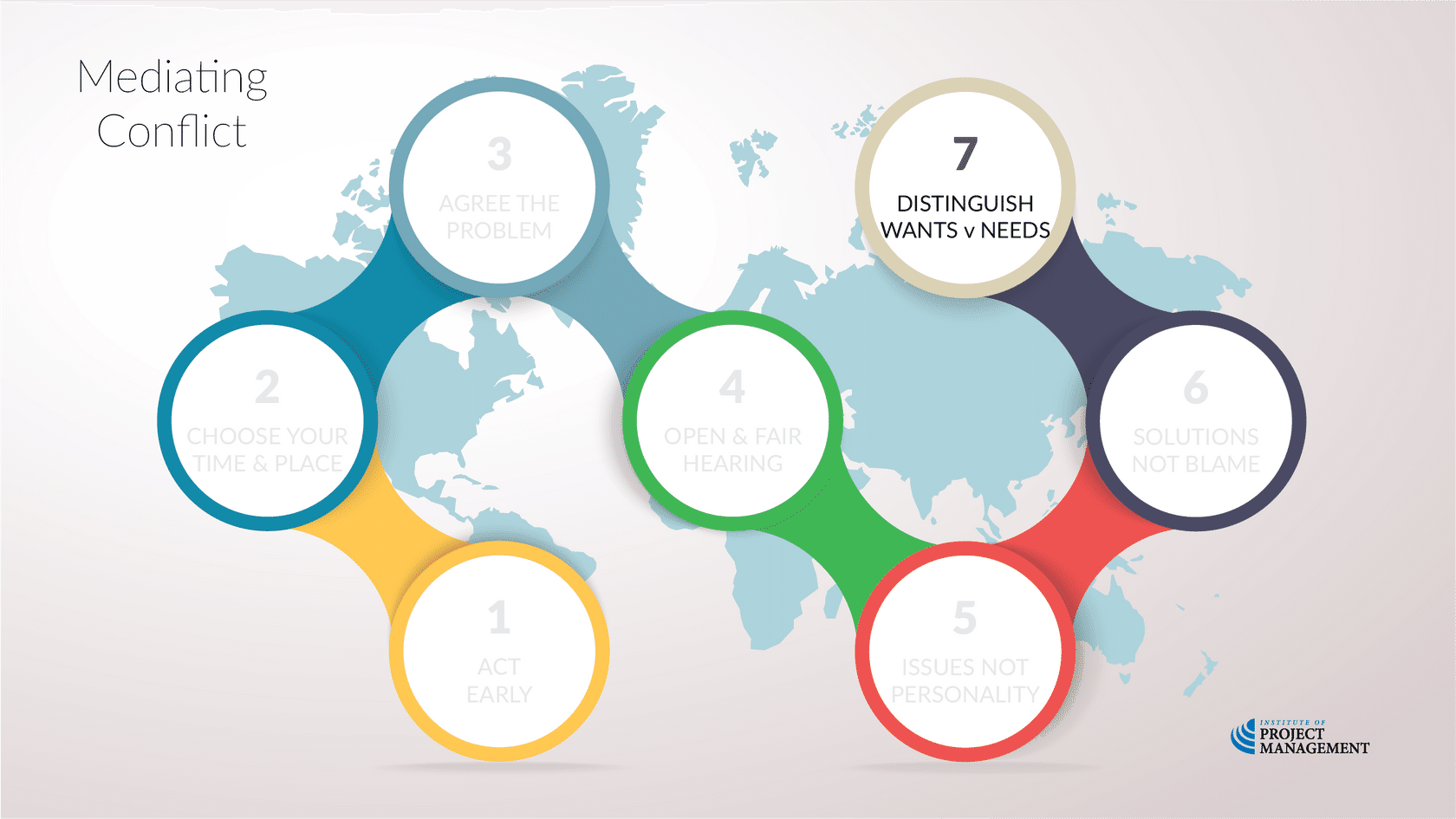 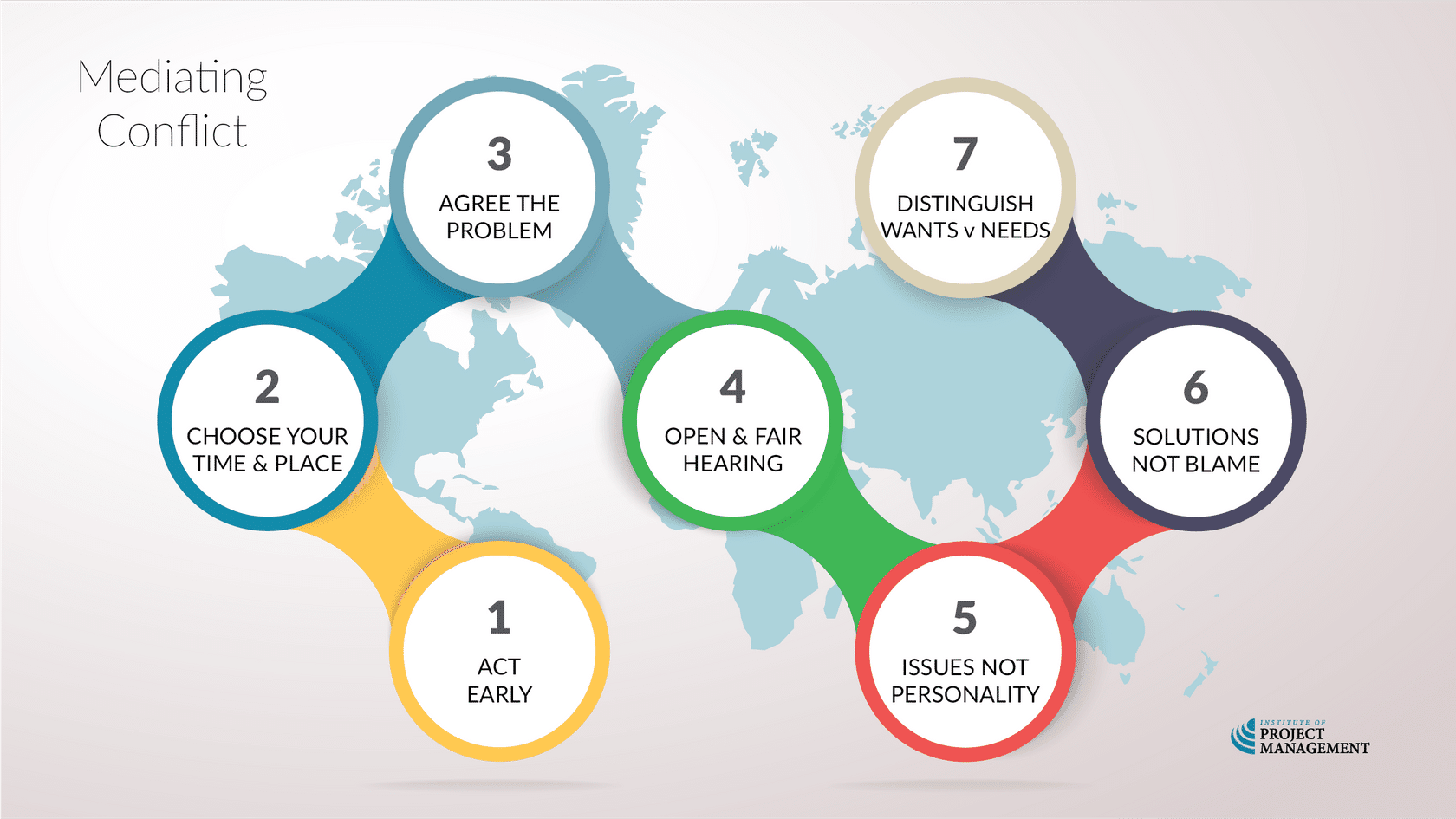 The sooner you recognise conflict, the easier – and more cost effective – it is to manage.

The longer conflict goes on, the more stubborn stakeholders become; the larger the circle of people is who are drawn into it; and the more damaging it becomes to productivity.

Avoiding conflict, as we will discuss later, is rarely the optimal leadership response.

Choose your time and place

Choose a good time to approach the affected parties so that no-one is rushed.

Don’t start when the one person is in the middle of an important task, or just about to head home – that will only add to the frustration.

Find a place where everyone can sit comfortably and quietly for a while.

Explain that the conflict has been worrying you and you’d like to sort it out.

This sounds like an obvious step, but often different underlying needs, interests and goals can cause people to perceive problems very differently.

You’ll need to agree the problems that you are trying to solve before you’ll find a mutually acceptable solution.

Sometimes different people will see different but interlocking problems – if you can’t reach a common perception of the problem, then at the very least, you need to understand what the other person sees as the problem.

You should also relate the problem to the project and how it is impacting or likely to impact on the successful delivery.

If there is no threat of physical violence, talking it out is the best solution.

Face-to-face contact is better than letters and messages – and a good deal better than banging on walls, throwing things, or complaining about it to everyone else.

You should also let each party know that you are listening.

You may not agree with someone, but there’s nothing more frustrating than trying to talk to someone who doesn’t appear to be listening.

Say that you’re glad you’re talking about the problem.

This helps to ease the tension and is a great help in moving things towards an agreement.

Focus on issues, not personalities

Too often, media-driven political debate is about the contest of personalities and not of ideas.

That’s because it’s easier and often more penetrating to attack something as simple as style rather than complex substance.

As a project manager, however, your priority is the project.

Don’t let popular opinion win the day – unless of course you have evidence that it is the best course of action.

Focus on solutions, not blame

You need to acknowledge the cause of problems; however, publicly berating an individual or group does not actually fix things, and may exacerbate tension.

Manage blame privately and with a view to remediation.

Differentiate between wants and needs

Where possible, distinguish the ‘must have’ propositions of stakeholders from things they would merely ‘like to have’ when determining your response.

Just be mindful that some people intentionally overstate their demands as a tactic, knowing that many of them are likely to be negotiated away.

By encouraging people to openly talk about their different views and disagreements in a calm and structured way, a culture of positive conflict awareness can be created.

Especially in the project environment, it is vital that new ideas and fresh approaches to work are generated and explored by way of vigorous discussion and debate.

It is inevitable and even desirable that different perspectives will lead to conflict at times, which can be framed as creative tension that requires resolution.

Nevertheless, if such conflict is poorly managed and consistently so, it can cause stakeholders to feel there is too much risk involved in contributing new ideas to the team and they may disengage.