The benefits of methodology

A methodology is a body of common practices, procedures, tools and techniques.

A project management methodology will therefore be the sum of the knowledge, resources and assets that an individual or organisation might acquire and apply to assure the successful delivery of their projects.

The good news is that over the last 50 years or so, there has been a concerted effort by project managers to professionalise their discipline.

At the core of this has been the development of some universal standards for the management of projects.

These standards can be literally bought off the shelf and applied to your projects today, saving you thousands of hours of time, effort and mistakes to learn from.

The benefits of applying project management methodologies include: 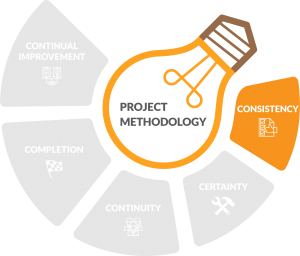 A methodology is foremost a communication asset, enabling a common language for project management in the workplace.

Within that framework, standardised (templated) project tools enable consistent reporting and accountability across programs and portfolios.

This ensures stakeholders and decision makers do not have to reinvent or reinterpret organisational processes for each new project. 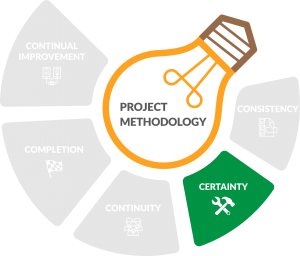 Adhering to a methodology better guarantees resources are available when needed, and project delivery is on-time and on-budget. Promises made to stakeholders are also easier to keep.

Documenting project decisions within this framework can also cover the project manager if there is a dispute about what has been agreed.

With established processes in place, problems are solved faster, there is greater compliance with organisational and regulatory standards, and less re-work is required. 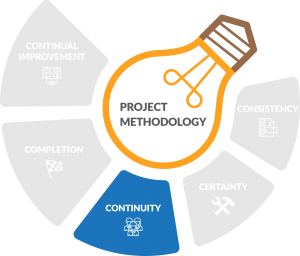 Project documents and the methodology that embraces them are a convenient and effective way of keeping project stakeholders up-to-date, acting as the ‘single source of truth’ for the project.

A well-documented and maintained methodology also facilitates a smooth transition when project personnel, requirements or even the operating environment change. 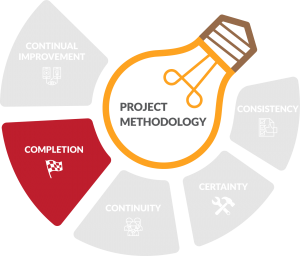 All of this means that projects are delivered faster and benefits are realised earlier, reducing investment costs and enhancing the reputation of your organisation.

This ultimately has a positive impact on organisational performance and staff morale. 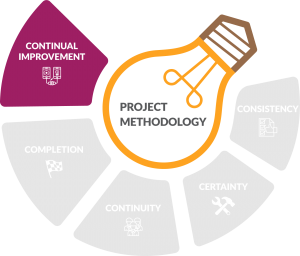 Even post-implementation, methodology outputs become a knowledge base for the organisation; a library that can be built on to template future project delivery and enable a culture of project excellence.

Organisations who operate without a formal project methodology will always find it harder to learn from failure and leverage success.

One of the first modern project management (PM) methodologies was the Program Evaluation and Review Technique (or PERT). Developed in 1963 by the US Navy for the Polaris submarine project, it was a statistical method for analysing and representing the variables in project scheduling.

PERT is still relevant today, and we’ll teach a basic version of it in the Module on Project Planning.

1963 also saw the US Air Force introduce and adopt Earned Value Management (or EVM) as a method for tracking cost and schedule performance. The principles of EVM remain largely unchanged and as relevant today as they were then – again, in later Modules we will guide you through this very important project management process.

In time, though, it was realised that PERT, CPM and EVM were incomplete as project management methodologies.

After all, in the military of the 1960s you could give someone a task and yell at them until it was done. Very few workplaces, however – and not even today’s armed services – promote such a culture.

Defence officers also received extensive leadership training, whereas many private industry project managers went to engineering instead of business school, and only learnt the leadership aspects of the job from their peers, if at all.

It was thus recognised that a complete project management methodology should formalise the ‘soft’ skills of management side-by-side with the ‘technical’ skills of budgeting and scheduling.

Perhaps the most well-known project management methodology out there today is A Guide to the Project Management Body of Knowledge (or PMBOK Guide).

First published by the Project Management Institute as a white paper in 1983, the PMBOK guide is an attempt to document and standardise generally accepted project management information and practices.

The PMBOK Guide is process-based, meaning it describes work as being accomplished by processes. Processes overlap and interact throughout a project or its various phases.

Another global standard for project management is PRojects IN Controlled Environments 2 (or PRINCE2).

PRINCE2 is derived from an earlier method called PROMPTII and from the PRINCE project management method. It was initially developed in 1989 by the Central Computer and Telecommunications Agency as a UK Government standard for information technology project management; however, it soon became regularly applied outside the purely IT environment.

Finally, the brash new kid on the block is Agile project management.

Primarily a project delivery methodology it too can trace its roots back to IT project environments, taking with it the best practice principles of lean (general) management.

We take a closer look to the pros and cons of Agile in the Module on Project Delivery.

Perhaps unsurprisingly, the majority of project methodologies are quite similar!

Many also have formal, paid accreditation pathways for practitioners, and any touted superiority of one method over the other is usually driven by salespeople as opposed to actual project managers.

In our opinion, the PMBOK, PRINCE2 and Agile methods are useful in enabling a common practice in organisations, but their benefits are often misunderstood and overstated. After all, studying for and passing a multiple choice test does not by itself make someone a good project manager.

Other popular project methods include Waterfall, Gateway, PRiSM, MPMM, Extreme Project Management, Lean Project Management and ISO 21500. These are all variations on the same theme that trend in popularity over time, industry and organisation.

No doubt another three have gone onto the market since you started this course!

In as much as PERT is a scheduling technique and Agile primarily a delivery approach, there are also a number of methodologies developed in other disciplines that are routinely applied to the management of elements of projects.

Total Quality Management (or TQM), Six Sigma and ISO 9000 are all quality management methods that are variously used to manage the product or process aspects of projects.

Similarly, risk management standards, such as ISO 31000, and various management theories of team development, leadership, communication, administration, and governance, all have a place in the management of projects, and we will touch on a number of these in this course as well.

Super-methodologies for managing programs and portfolios of work, such as OPM3 (the Organisational Project Management Maturity Model), are beyond the scope of this course.

Which methodology do I use?

So which methodology is best? That’s what you really want to know, isn’t it!

The generic nature of these methodologies means that they require different emphases at different points, depending on the nature of the project undertaken.

Some aspects of your chosen methodology can be discarded entirely, while you might need to invent others from scratch, especially if your industry has specific compliance requirements.

The other problem is that these off-the-shelf methodologies are often stand-alone.

This is all well and good, but the chances are that your organisation already has methods for performing tasks or managing processes.

Therefore slavishly adopting a PM methodology that you learned on a nifty course might actually cause inefficiencies and tension in a workplace that already has its own hard-won body of assets and knowledge.

As with all things project management, balance is the key.

Our expectation is that by the end of this program you will be able to use the proven, good practices we introduce to develop an individually or organisationally unique best-practice project management framework.

In other words, you will be able to take what already exists within your organisation – along with what you find in courses, software, templates and the Googleverse – and use your expert judgement to arrive at the optimal method for delivering successful results.

Keep in mind, too, that the global body of knowledge expands and evolves every day.

The best project managers stay plugged in to industry news and developments, constantly refreshing their knowledge and organically improving their practice.

A quick note on project management software before we move on.

We are often asked, “What is the best project management software?”

If you have been paying attention in this topic, you can probably guess that we are going to prevaricate and say, “It depends…”

More on that in a second.

The related assumption – that is just plain wrong – is that an organisation’s project management software is its methodology.

Software is a tool; a methodology is a set of processes.

Aptitude in PM software does not, by default, equate to good project management.

It is how you use the software, and not the software itself, that should be understood to be part of your method.

After all, your method should be much, much more than the work you do at your desk.

Besides, there is no single software solution to project management.

Tools such as Microsoft Project and Oracle’s Primavera are dedicated platforms that make it much easier to manage your scope, time and cost; however, they are silent on how to manage risk.

CRM software such as Salesforce might plug in to help you organise your stakeholder relationships, but you will still need to master the function and form of word processing, spreadsheeting, presentation and email applications.

Microsoft, Apple and Google are among the many who will be delighted to help in this regard.

You might also bring all your project information together in cloud assets such as DropBox or SharePoint – but I think you get the point.

Once again, there is no “silver bullet” solution to the software dilemma

Although software is undeniably an essential asset in any 21st-century project, your choices should be informed by what you currently use and the cost / benefit advantage that more fancy alternatives might provide.

Back to Unit 1
Previous Topic
Next Topic
To search the Directory of Certification holders, click here